Is grade inflation in colleges and universities symptomatic of fraud?  Maybe. According to the dictionary, grade inflation represents the “the awarding of higher grades than students deserve either to maintain a school’s academic reputation or as a result of diminished teacher expectations.” (See Dictionary)

Grade inflation:  Stuart Rojstaczer, later joined by Chris Healy conducted extensive research on grade inflation and found that “until the Vietnam War, C was the most common grade on college campuses (para 5, line #2)… By 1973, the GPA of an average student at a four-year college was 2.9. … By the mid-to-late 1990s, A was the most common grade at an average four-year college campus (and at a typical community college as well).  By 2013, the average college student had about a 3.15 GPA.” (para 11, line #1 ) [see chart below and available at Gradeinflation.com]. 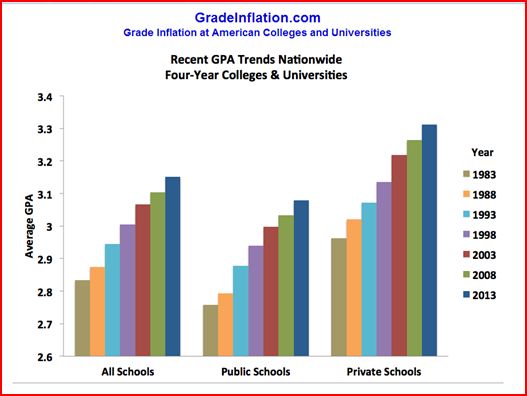 And here lies the problem, When students attend schools that practice grade inflation, decision-makers will be less inclined to use grades as an objective measure of the student’s past performance and a predictive indicator of future performance. Brad Polumbo   theorizes, a high grade point average (GPA) will hold less quantitative value for entrance into law, graduate, or medical school. Heck, a high GPA may not be enough to, “land you a job interview because other people who didn’t deserve higher grades got them anyway. Instead, more weight will be given to your standardized test scores (the fairness of which are controversially debated) or personality.”

What is the connection to fraud?

And, why write about these two seemingly unrelated topics: grade inflation and cheating on standardized exams?  Two days ago, it was reported that 32 private schools in Morocco were found to have inflated test takers’ assessment scores. To detect the inflated exam scores, investigators may have used linear regression analysis (as noted in the Handbook of Quantitative Methods for Detecting Cheating on Tests by Gregory J. Cizek and James A. Wollack),  Steps involve “modeling student achievement longitudinally [to] look for greater than expected increases in test-taker performance gains at a particular time point of interest.” (Cizek and Wollack, page 246, line 1). As such, Moroccan investigators analyzed these data points in search of anomalies:

In analyzing the data sets, they could readily identify data (scores) that were outside of the expected range of performance. The investigators concluded that there were “huge disparities between the students’ continuous grades and their baccalaureate results and regional grades.” (para 3, line 1).

What is interesting is that the Ministry of Education in Morocco, deemed that the incidents investigated demonstrated institutional misconduct and not random acts by mere individuals. Clues can be found in the statement that, “it [the Ministry] would take measures against any institution involved in inflation.”  (para 5, line #1) Further hints of payoffs to institutions by wealthy families can be gleamed from the Ministry’s statement that such practices “undermine the principle of equal opportunities between students.” (para 5, line #1)

So while some inflate grades to increase student self esteem (lowering student real competitiveness and increasing demands of entitlement), here and abroad institutions are fraudulently manipulating standardized test scores (to increase student fake competitiveness). Go figure. I guess it shows, you can never game the system as there will always exist (either in nature or man-induced), a countervailing phenomenon.