There has been an  outcry rebuking the re-newed focus on apprenticeships, career, and technical education (CTE). It is for naught. For instance, Anthony Carnevale, the former member on President George W. Bush’s White House Commission on Technology and professor at Georgetown University Center on Education and Workforce was interviewed by the Fadulu, of The Atlantic.

Fadulu summarized Carnevale’s recollections of the past 30 years in that CTE programs “tended to pigeonhole certain types of students into blue-collar jobs rather than higher education.” He quotes Carnevale, “These kids that weren’t making it to college were black, brown, and low income and working class.” (para 4, line #2 and Line #3).

Carnevale is well intentioned, of course. His assessment may or may not be entirely accurate,  based upon the data collected. The cumulative percentage of change (from 1994 to 2016) of Black students enrolled at four year universities was 23 percent and almost 40 percent at two year community and junior colleges.

What is striking, however, is that during this same time period,  the cumulative percentage change of Black students enrolled at elite colleges and universities  flat lined to -3 percent (that’s negative 3 percent), dipping from highs experienced in 2005 and steadily declining since.  One would surmise that the availability of apprenticeship and CTE programs had  little to do with this phenomenon (as like other racial groups, minorities are not homogeneous, possessing the same attributes, talents and intellect). See the chart below. 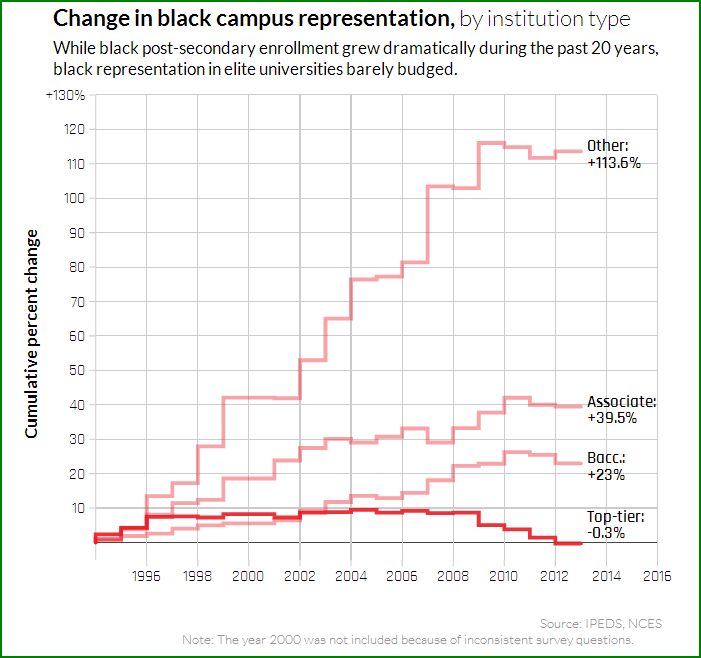 The dramatic cumulative percentage change of Black students enrolled in ‘other specialized programs’  (113 percent positive change) is worth noting.  According to the National Center for Education Statistics (NCES), this figure includes: graduate centers, maritime academies, military institutes, and institutions that do not fit any other classification category.” (page 74, para 2)

Past and Present Myths

It may stand to reason that as elite colleges and universities become increasingly more competitive, so too second and third tier, hence the astronomical shift of Black students to ‘other specialized schools.’

Considering the educational landscape, what should minority and specifically Black young adults do when planning for a career?  Look at the chart from the Economic Policy Institute evidencing declines in the wages of young college grads since 2000. 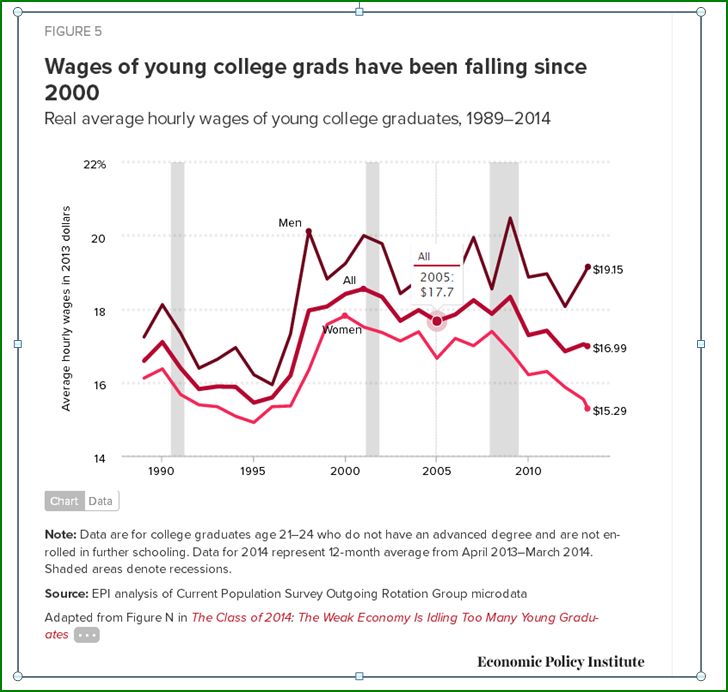 Now, please compare the positive trend of wage growth for blue collar workers (top bars for Production) against the  bottom bars for Management and professional related  depicted in the chart ‘Blue Collar Dollar’ prepared by the Economist below. 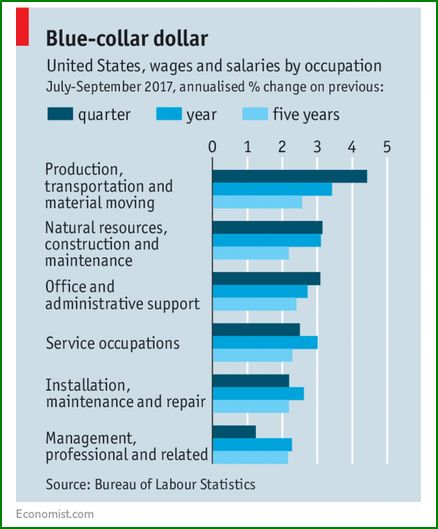 Should  high school graduates search for their piece of the American pie through an ever closing window of advanced opportunities afforded by a four-year degree? Or, obtain a professional certificate or learn a technical trade, (too numerous to list here) many of which don’t even demand a high school diploma?

What Carnevale gets right in his analysis is the mismanagement, waste, fraud and abuse alluded to in The Atlantic, “the high costs of apprenticeships and the U.S.’s dark past with job training will stymie the effort” to emphasize the potential for expanding job training programs (para 2, line #1).

He may have a point. I researched to find that the GAO conducted an audit in 1991 which may have been the height of such programming. They found:

How fraud examiners and internal auditors can help

The crux of the issue regarding the misstatement of accounting data and the manipulation of JTPA program data lies in the rule that ” a minimum of 70 percent of available funds be spent on training and limits to 15 percent the amount that can be used for administration.” (GAO Report, page 3).

Fraud examiners and internal auditors can:

So when one assumes that the problems relating to apprenticeship, job training, career and technical education programs are unsolvable, seek the assistance of a fraud examiner for deterrence. It would be a crime not to. Our  minority, rural and middle-class students who excel in tactile, manual labor and technical work need us to have the political will to solve this problem and to not push it aside for faulty and misguided assumptions that higher education is the ONLY pathway to the middle class.